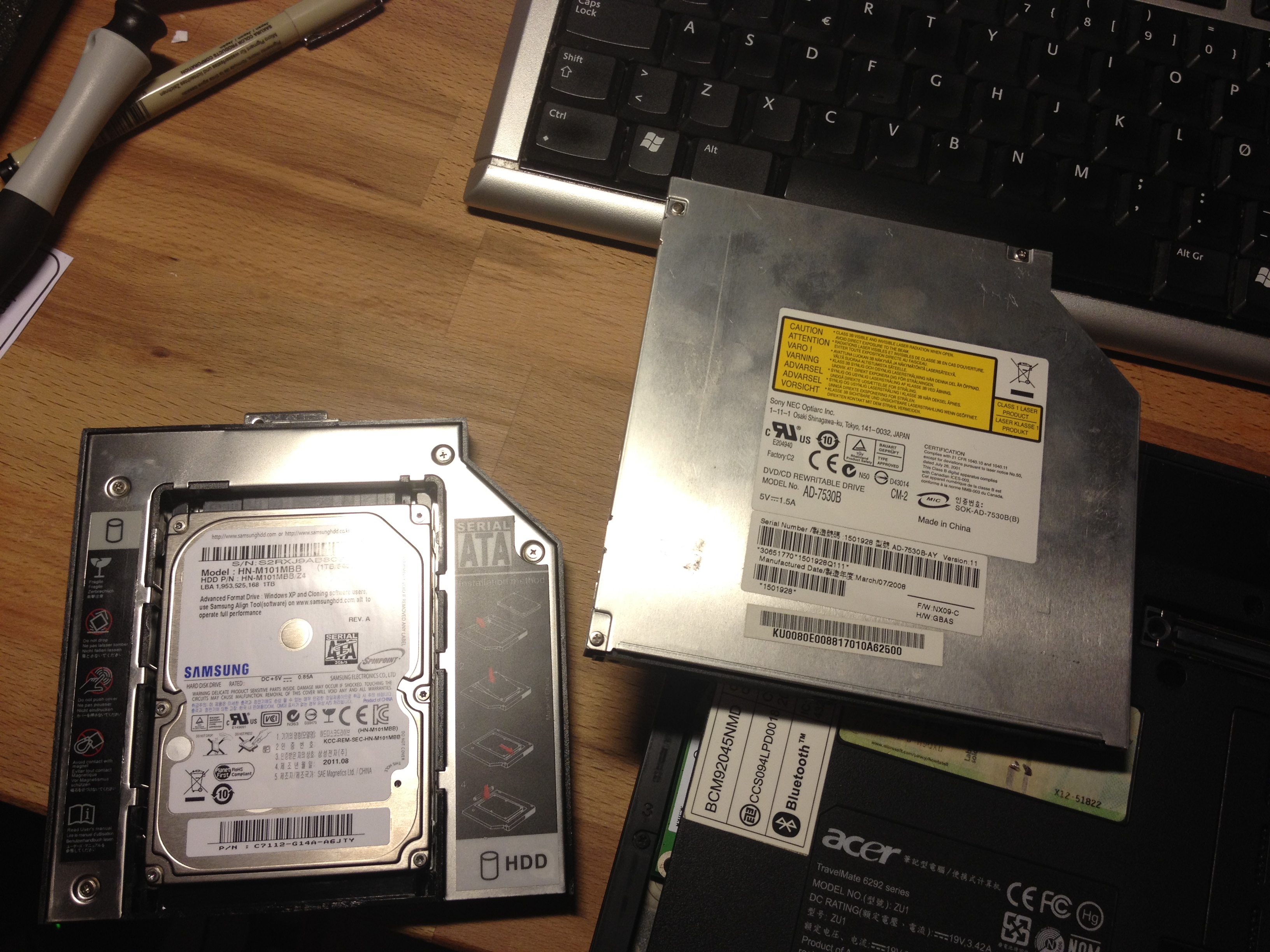 As my trusty Acer Travelmate 6292 is about to pass 4 years of service, I have been considering buying a brand new laptop. My main issue though is storage space, as I at the moment store all photos on this laptop, and intend to keep it this way. Browsing through the different webshops I couldn’t quite find any laptop suiting my needs. I was thinking I could get a combined solution, utilizing the speed of SSD (as a system drive), and continue to use my 1TB internal HDD as storage drive. However, all PC’s seemed to have only one bay.

More or less by accident I stumbled across «HDD caddies». A caddy is, in short, a rather simple device that replaces the CD-rom, and in which you can put a second harddrive. It attaches to the bus as a normal device, and the system itself does not really care if it is a CD-rom or hard drive. Bingo! Downside is, of course, that you won’t have the CD-rom as handy anymore. Not a disaster to me though, considered that I am allowed two hard drives on a laptop. And external CD-roms (or DVDs) is quite affordable in any eletronics store nowadays.

So I unscrewed the CD-rom of my laptop and had a look. It sure looked quite the same as the one on ebay, though I couldn’t find this specific Acer Travelmate model in any list on the internet, saying that there was a caddy available. However, it was supposed to be «universal» – and from the pictures, the shape looked quite similar.

I took the chance, spent $14 on the universal ebay device, and started waiting. And two weeks later it arrived. And surprisingly – it was a perfect fit! Even the original CD-rom cover fitted, and a locking bracket. After (quite) a few hours of gpart‘ing, I had moved the Windows 7 and Fedora partitions over to a new SSD, and set up booting correctly. Hopefully the laptop can do another year or two thanks to this $14 (plus SSD 😉 ) upgrade!

(The blog title relates to the fact that this upgrade cannot be done to most new laptops, as they don’t have a CD-rom drive that can be changed in the same manner.) The two drives. Fortunately they have the same shape, so they can be interchanged 🙂 The new caddy with the old (original) CD-rom drive cover attached. No visible change, though eject button will not work anymore 😀 Even the original fastening bracket could be fitted to the caddy.